An internationally-acclaimed artist, curator, painter, writer and activist, Viviana Puello is highly recognized for her work as the diligent Art Director of the acclaimed ArtTourInternational Magazine - a prestigious publication that, issue after issue, is winning the hearts of so many artists and taking the art world by storm.

Viviana Puello has worked as an artist and curator for over 20 years and is also the founder of the Vivid Arts Network, an international art organization that serves as a platform for professional and emerging artists looking to receive international exposure. With Vivid Arts Network, Puello’s efforts as an activist for the cause of abolishing human trafficking are directed towards helping ECPAT International - an association that helps heal victims and creates programs for the prevention of this crippling social issue (www.ecpat.com).

In 2011, Puello founded ArtTourInternational Magazine; after 10 months of research and preparation made possible with the help of her creative team, the first issue of the magazine was published in December 2011 and distributed to fifteen hundred readers and artist friends. Today, ArtTour International Magazine has over 2 million readers and is present in over 60 countries - an accomplishment that Puello attributes to the great crew of people behind the publication and the great network of artists that take part in each issue.

Puello splits her time between Italy and her beloved New York, the city in which she gained experience while working for a notable TV Station.  After founding ArtTour International Magazine and seeing its great success, Puello founded the ATIM WEB TV Channel where she uses her past experience in journalism and communications to expose contemporary artists through the live broadcasting of events and the “Art 2 Heart” interviews she does while traveling with her team.

Viviana Puello started her career as an artist in her native Colombia at a very early age; growing up in Cartagena, a bohemian city that kisses the Atlantic Ocean, art was always an essential part of her early life. Puello started painting at the age of twelve, surprising everyone with her talent. Her works were initially inspired by Colombian artists whom she looked up to like Fernando Botero and Alejandro Obregon. Puello is collected internationally and has premiered in film, television, and theatre.

She lives and works in Ferrara Italy with her husband, Alan Grimandi, CO-director of the Vivid Arts Network organization and Video Producer for the ATIM WEB TV Channel.  Puello enjoys painting, writing, traveling and, in her spare time, working on her farm where she can enjoy quiet respites in between her trips.

Most recentely Viviana Puello has been awarded with the Grand Medal of Honor by the National Academy of Fine Arts in Brazil.

Vivana can be contacted through her email address: vp@arttourinternational.com. 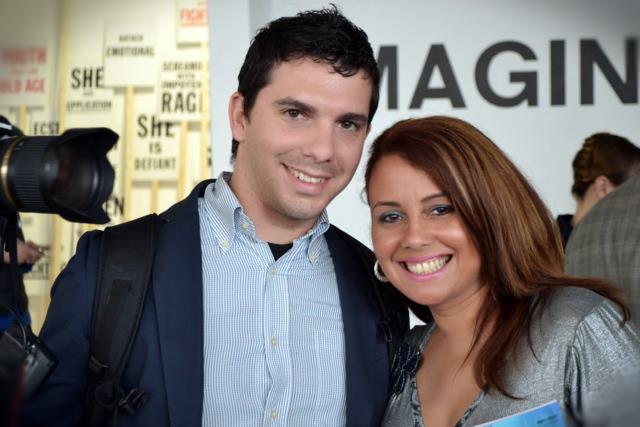 Viviana and her husband Alan Grimandi